The Practical Implementation of Constitutional Tender 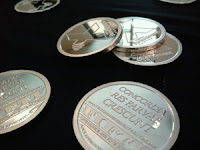 Now it gets interesting. For several months I have been writing on the issue of honest money and its return to America, via the states. Judging from the response (or lack thereof), the issue is still very much off of the radar of the average American, including many hard asset advocates. Honest money is, however, quietly – and quickly – making its way into the main stream discussion...

...Let me go out on a limb and say those famous last words… “This time it is different.”

1) The United States is moving toward a debt/currency crisis of immense magnitude.

2) The American people are becoming increasingly aware of it, thanks to the tireless work of the above mentioned heroes.

3) There are two new variables that make this latest iteration of the decades long sound/honest money debate different...

...Larry Hilton was instrumental in helping nurture Utah’s law through to its ultimate passage. When I asked what the most important issue was facing Utah’s sound money initiative, he did not hesitate. “We need as many legislators as possible in as many states as possible to pick up the torch. Implementation of a simple bill in multiple states will strengthen support for sound money across the nation.”

To that end, he is planning a Sound Money Summit to be held in Deer Valley, Utah on September 26th and 27th. The purpose of the summit is to craft a “declaration of principles” that various states can agree upon regarding sound money. “The declaration will then form the foundation for model legislation.” stated Mr. Hilton. “If the summit can accomplish those two objectives – agreement on a declaration and model legislation – will put state legislators in good shape going into 2012.”

Here’s to the Sound Money Summit. Mark your calenders. September 26th and 27th promise to be the next quantum leap forward as the states move to return to honest money.READ THE FULL ARTICLE HERE...
Posted by ConstitutionalTender at 9:21 PM