Phase Out the Fed With State Sound Money Laws

The preeminent expert on Constitutional money, Edwin Vieira, has a strategy for phasing out the use of Federal Reserve Notes through new state laws providing alternative currencies, which he has been promoting via interviews and videos for the past several years.

Basically, Vieira advocates that states start taking advantage of their sovereignty as guaranteed by the Tenth Amendment and their constitutional mandate under Article I, Section 10 not to "make anything but gold and silver coin a tender in payment of debts," by passing laws providing alternative currencies in their states based on gold and silver.

A good way to understand Vieira's strategy is to view the video, "What Is Constitutional Money?", shown below, which consists of a lecture he gave last November in Washington, DC, sponsored by Congressman Ron Paul. Be sure to view all the way to the end of the question-and-answer period to get the whole story.

READ THE FULL ARTICLE HERE...
Posted by ConstitutionalTender at 10:33 AM No comments:

Investing in silver and gold has become more attractive since the US dollar just doesn't have the clout it once did.

Fears over where the dollar is headed – especially with continued money printing from the central bank – has pushed safety-seekers into investing in silver and gold. Demand has also pushed gold and silver prices to new highs.

The idea of using gold and silver as an alternative currency has spread as the metals have grown more valuable. In fact, worries that the US dollar is on the cusp of a collapse have lawmakers from more than a dozen states (up from just three in the past few years) seeking approval from their state governments to either issue their own alternative currency or use gold and silver as a currency for settlement of state-related transactions.

Rep. Glen Bradley, R-N.C., who introduced a currency bill in 2011, told CNN Money, "In the event of hyperinflation, depression, or other economic calamity related to the breakdown of the Federal Reserve System... the state's governmental finances and private economy will be thrown into chaos."

While the US Constitution bans states from printing their own paper money or issuing their own currency, it does permit states to make "gold and silver Coin a Tender in Payment of Debts."

The first state to introduce its own alternative currency was Utah. Gov. Gary Herbert signed a bill into law in March that recognized gold and silver coins issued by the US Mint as an acceptable form of payment.

Under the law, the coins, which include the hugely popular American Gold and Silver Eagles, are treated the same as the US dollar for tax purposes, eliminating capital gains taxes. The new law allows the coins to be exchanged at their market value, based on weight and fineness.

Rich Danker, a project director at the Washington, D.C.-based conservative public policy American Principles Project, explained to CNN Money, "A Utah citizen, for example, could contract to sell his car for 10-one ounce gold coins (roughly $17,000), or an independent contractor could arrange to be compensated in gold coins."

These other states have similar policies:

READ THE FULL ARTICLE HERE...
Posted by ConstitutionalTender at 9:34 AM No comments:

End the Fed! Whether Congress Wants us to or Not! (@TenthAmendment Center #nullification)

Today was a big day for supporters of Sound Money – as Ron Paul’s Audit the Fed Bill passed the House 326-99. But, it still needs to get through a very hostile Senate, where it will likely never see the light of day. So in closing tonight, a new approach – Ending the Fed. Whether Congress Wants us to or Not!

... Not to say that you should want a secret national bank, but rather – is this kind of activism the best place for you to put your energy…and hope? Will lobbying the Senate get Harry Reid to allow a vote? Will calling Mitch McConnell change anything? Will Barack Obama or Mitt Romney allow such a bill to pass without their veto?

I believe the answer to all these questions is a big, fat NO.

PULLING THE RUG OUT

On the other hand, in contrast to attempts to put a stop to the Fed at the national level, a paper that William Greene presented at the Mises Institute’s “Austrian Scholars Conference” proposes an alternative approach to ending the Federal Reserve’s monopoly on money. The “Constitutional Tender Act” is a bill template that can be introduced in every State legislature in the nation. Passage would return each of them to the Constitution’s “legal tender” provisions of Article I, Section 10:

Such a tactic would achieve the desired goal of abolishing the Federal Reserve system by attacking it from the bottom up – pulling the rug out from under it by working to make its functions irrelevant at the State and local level...

READ THE FULL ARTICLE HERE...
Posted by ConstitutionalTender at 1:41 PM No comments:

Ron Paul on the "Free Competition in Currency Act"

John Maynard Keynes once stated that “There is no subtler, no surer means of overturning the existing basis of society than to debauch the currency. The process engages all the hidden forces of economic law on the side of destruction, and does it in a manner which not one man in a million is able to diagnose.” Such a situation is exactly what faces this country today, as the Federal Reserve seems hell-bent on destroying what little purchasing power remains of the U.S. Dollar...

... Economics teaches that monopolies produce fewer goods and sell them at a greater price than in a competitive market. This leads to inefficiency, deadweight losses, and over time complacency on the part of the monopolist. Most mainstream economists fail to extend the theory of monopoly to the market for money. Government monopolization of the issuance of money fails to produce the sound money the market demands. The poor-quality money that is issued continues to lose its value, and the American people must work longer and harder for money that continues to decline in purchasing power. Meanwhile, government agencies and the banking system benefit from the first use of that money, being able to spend it and lend it before it circulates through the rest of the economy and before prices increase in reaction to this inflation.

The only way to counteract this problem is to break the government monopoly on the issuance of money. The Constitution does not grant the federal government this monopoly, a fact which was not in dispute for nearly a century after this country's founding. The federal government has become complacent, forgetting the need for sound money, and the only way to break this complacency is to break the monopoly. HR 1098, the Free Competition in Currency Act, intends to do just that...

...I hope that this hearing will start a vigorous discussion of currency competition, sound money, and how to return to a sound dollar. HR 1098 is certainly not a panacea, as there remain significant structural problems in our banking and monetary system that still need to be addressed. But allowing for competing currencies will enable Americans to choose a currency that suits their needs, rather than the needs of the government. The prospect of Americans turning away from the dollar towards alternate currencies will provide the necessary impetus to the US government to regain control of the dollar and halt its downward spiral. Restoring soundness to the dollar will remove the government's ability and incentive to inflate the currency, and keep us from launching unconstitutional wars that burden our economy to excess. With a sound currency, everyone is better off, not just those who control the monetary system.

READ THE FULL ARTICLE HERE...
Posted by ConstitutionalTender at 9:15 AM No comments:

Peter Schiff has started a bank... but not just any bank.

This is a real bank, that deals in real money.

In other words, you can open accounts in any denomination you want, whether fiat currency OR gold bullion -- whatever you'd like. 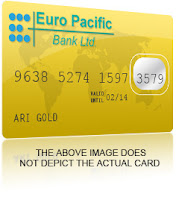 You can even get a "gold debit card" that you can use anywhere in the world. It's backed by actual gold, which converts to whatever currency you're needing at the time you hit that ATM.

It's the sort of thing that the Constitutional Tender Act calls for in banking...

...Well, there is one caveat: you can't open an account at this bank if you're a U.S. citizen.

U.S. security laws have become so intrusive, burdensome, and expensive to comply with, that it made it difficult for Schiff to offer his services to his non-U.S. clients on a globally-competitive basis. So, he opened his bank offshore, in St. Vincents and the Grenadines. Since it operates outside the jurisdiction of U.S. security regulations, and does not accept accounts from American citizens or residents, U.S. regulations don't apply.

As a result, this offshore bank can offer a far more robust platform of services, with less hassle and at lower cost, than Schiff's U.S. brokerage firm. In addition, bank clients' privacy is protected by strict bank secrecy laws of St. Vincents and the Grenadines.

So, if you'd like to finally open a bank account backed by real money -- sound money -- that you can have at your fingertips (literally!) at any time -- well, now you can...

That needs to change.


READ ABOUT IT HERE...
Posted by ConstitutionalTender at 9:14 AM No comments: