People are starting to get it. The tide is turning. A perfect storm is brewing. We MUST NOT let up now.

Why are so many state legislators beginning to call for issuance of a form of gold money? 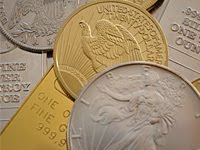 in Payment of Debts….” By prohibiting everything except “gold and silver Coin” the Constitution clearly contemplates this as legitimate.

Legislators in a dozen states are looking at legislation about gold or silver-based currency, including, right now, Utah, South Carolina, Virginia and New Hampshire. States haven’t issued money for over a hundred years. So … why now? There is disgust by state legislators with the federal government’s promiscuously printing money. This reflects the views of those who wrote and adopted the United States Constitution...

...So legislators in twelve states are exploring gold-based currency. It is reprehensible for national elites to deride those who are doing so. Whatever objections one might have to the mechanisms being considered the impulse is legitimate and even noble. State legislators are challenging the federal abuse of an unconstitutional power, challenging the issuance of unhinged paper money.

READ THE REST OF THE ARTICLE HERE...
Posted by ConstitutionalTender at 5:11 AM