In the summer of 1932, Louis McFadden, a former bank president turned Pennsylvania Congressman, stood up on the House floor to reveal a sinister plot. Over the course of a 25-minute speech, he explained how the Federal Reserve — “one of the most corrupt institutions the world has ever known” — was being steered by a cabal of European bankers who had, among other sins, paid for 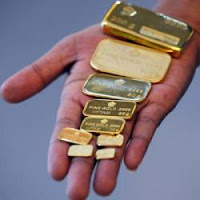 Leon Trotsky’s return ticket to Russia and funded the October Revolution. But McFadden’s pleas to dismantle the Fed and embrace gold (in his view, “the only real money”) were greeted with ridicule. One fellow Republican joked that his poor colleague must be suffering from some sort of “violent disease” — one that “warps the judgment” and “narrows the vision.”

Eighty years later, however, the quest to take down the Fed and revive the gold standard is harder to laugh off. Already this year, in Georgia, a Republican state legislator, Bobby Franklin, has put forward a bill that would require all state residents to use gold and silver coins to pay their taxes — and it has gained surprising support. In Utah, another legislator has proposed allowing residents to mint their own coins and conduct state business with gold. Virginia delegate Bob Marshall is backing the study of a new state currency, as a fail-safe “in the event of a major breakdown of the Federal Reserve System.” (The last time Virginians had an official currency other than the dollar was during the Civil War.) Similar proposals are sprouting up in Montana and Idaho, all with the same goal — to free the states from the Fed, which, many gold bugs contend, has been eroding the value of the dollar and laying the groundwork for ruinous inflation.

If there’s an architect of this new state strategy, it’s William Greene, a 46-year-old conservative activist and founder of RightMarch.com, which he built to “counter the well-financed antics of radical left-wing groups like MoveOn.org.” Two years ago, Greene, who has a Ph.D. in theology and teaches part-time, was reading the Constitution aloud with students at Georgia’s Gainesville State College when the class stumbled over Article 1, Section 10: “No state shall … make any Thing but gold and silver Coin a Tender in Payment of Debts.” The idea hit Greene: What if residents in states like Georgia had to pay their taxes in gold and silver? Businesses and individuals would then have to start stockpiling gold and silver in their bank accounts. As the price of gold rose (as, he reasoned, it inevitably must) and the dollar’s value fell, Georgia’s gold-funded budget would find itself on solid footing. People from other states would flock to Georgia’s banks to open their own gold accounts. Eventually, the masses would rebel against paper money. “At that point,” Greene explains, “the Federal Reserve system will have become unwanted and irrelevant, and can be easily abolished.”

And so, in 2009, Greene took his idea to the Georgia legislature, where it earned a hearing in the banking committee, and drummed up interest from a number of legislators — over the frantic objections of local banking officials. Lately, Greene has been talking to other states, including a task force in Idaho, about his idea. “Going at this from the state level has a much higher chance of success in terms of the eventual elimination of the Fed,” he says.

READ THE REST OF THE ARTICLE HERE...